Thank you for your patience while we retrieve your images.

Lt Chris Mach radioed that he had a good smoke condition from the building and that they were investigating the source. Engine 2 reported that the interior was charged with heavy smoke, the sprinklers were operating, and they couldn’t find the source of the fire.

A working fire was struck and then a quick second alarm on the arrival of the Chief. Companies were ordered to open up all man and overhead doors around the complex to aid in ventilation of the large complex. Bellingham Ladder 1’s crew readied themselves on the tip of the aerial for the order to cut the metal roof above the fire.

Interior teams reported that they found the seat of the fire in a machine towards the rear of the building. The machine’s cutting oil and shavings appeared to the source of the flames. Dry chemical and Class D extinguishers were used on the fire to attempt knock down. A Class B foam hand line was also stretched in as a back up.


The fire was eventually smothered after several flare-ups. Command began to release the mutual aid companies during the ventilation phase.
The fire was contained to the machine with smoke damage throughout the building. 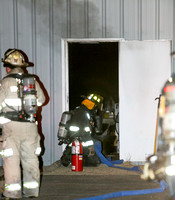